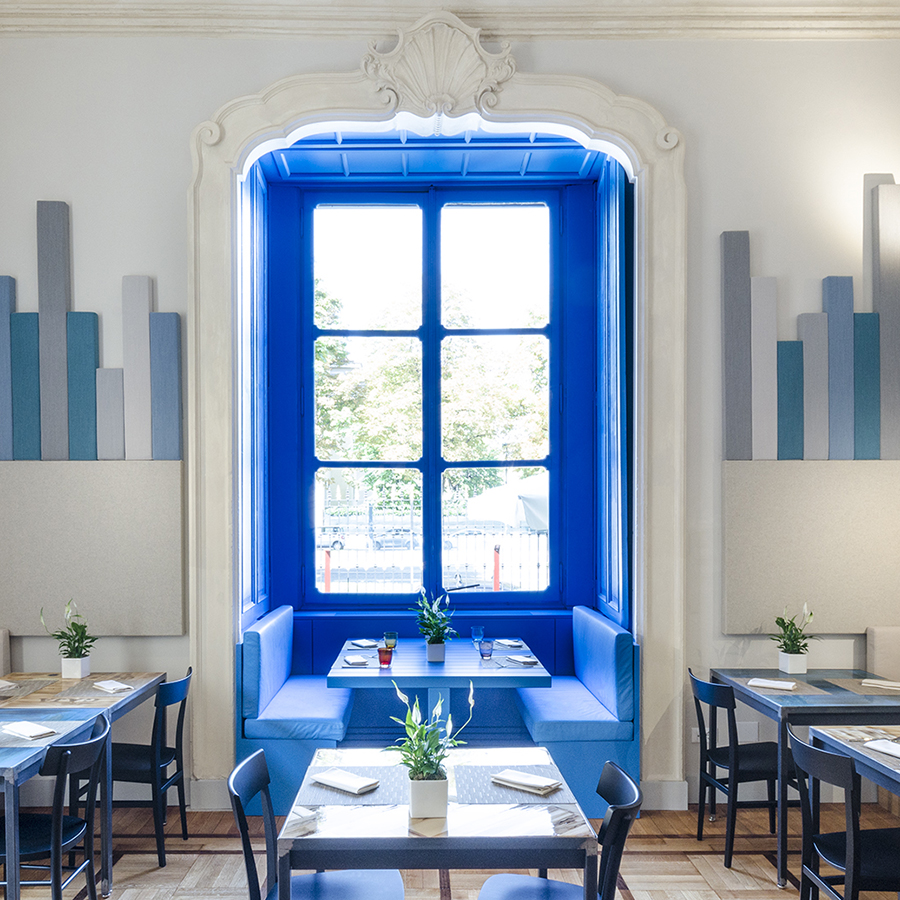 Palace dating back to mid-nineteenth century, for which was selected a conservative restoration, with the additional help of a group of restorers to fix the ceiling frescoes.
The idea was to maintain as much as the original doors and windows, by working the wood and giving it a vintage imprint. The renovation project took place inside and outside the building, creating new spaces inside the rooms, as it is in the main entrance where we made a terrace for evening events or to welcome guests.

In this work, technology merges with a revisited vintage theme, which stands out for its modern and contemporary mood.
The bar counter, together with the furniture, have been designed by our studio. The bar counter is made of corian, which offers a dual effect: when you switch on the LEDs behind the bar you suddenly see graphic elements (outline of bottles and other images) whilst when off it seems a white face.

The lichen-covered wall creates a game of lights with a spectacular three-dimensional effect. The lamps were created by the Studio. In the main room, the Studio drew uncommon decorations, such as the benches and a stylised skyline, which is formed by special panels covered in fabric acting as a noise insulator. The colors used are very similar to colors of the frescoes on the ceiling. Also the chandelier and the lights – that illuminate the panels on the wall as if it were an installation – were created by the Studio.
The wallpapers have a 3D effect and, in this way, also the library seems three-dimensional. In the VIP dining room the walls were pickaxed to make the frescoes stand out and lamp sculptures made in black metal were added, which give a two-dimensional effect and can be used as bottle holder. The tables in this room, made of black resin with the drawing of the plates, follow the two-dimensional line of the sculpture lamps. The tables were also made with recycled wood or with the old boxes of wine, coming from the restaurant of the owners. The hardwood floors have been restored to their original aspect.